I can’t think of a more appropriate day than today to talk about sharing opinions. But this post isn’t just about political opinions it’s about opinions in general why I’ve become afraid to share mine on social media.

I’d say I’m quite an opinionated person in real life. Forthright about things and quite happy to be vocal, but I’ll be honest I don’t express my true opinion about many things online and most especially on Twitter.

The fact is if you share your opinion online, especially somewhere like Twitter you have to be ready for someone to disagree with you. Its guaranteed. There’s always someone who will try and tweet louder than you and let’s be honest 140 characters isn’t enough to accurately express anyone’s opinion in full, neither can you ever really ascertain tone of voice. You’ll find very quickly tons other people jumping on the outraged bandwagon and before you can say pitchfork, there’s a whole queue of people waiting to tell you why your wrong.

The moral is, if you’re going to share your opinion be ready for a comeback because on Twitter there is ALWAYS drama!

We have to remember that opinions are just that, opinions. Everyone is entitled to one and though those people that speak theirs are pretty brave, people that try and ram their own views down other people’s throat or gang up against one person’s opinions, I just can’t agree with.

Take for example the Sarah Ashcroft drama. Now unless you’ve been living under a rock you’ll know that Sarah did an interview with Cosmo that quite a few bloggers took offence to. So, here’s opinion of mine number one. Ignoring the complete hash that Cosmo made of the whole thing and please remembering that print can ALWAYS twist what’s being said with the simplest use of the wrong word – she was right. Not everything she said and certainly not the way it was put across, but some of what she said was bang on. There are a lot of bloggers, the market IS over saturated and to stand out or be taken seriously you have to be doing something different.  But my god did she get blasted for this article. And that’s fine, like she’s entitled to have an opinion so are other people. But seeing the number of people @ing her and being pretty personal and mean was too much for me. I’ll be honest, I felt for the girl. She admitted that it was a dream come true to be interviewed by Cosmo and I felt sorry that on the receiving end of all the controversy, all the awful tweets was one 22-year-old girl. If you saw a girl cornered by 30 other girls in the street, would you go and help? I’d like to think I’d try, but online I was terrified. I didn’t tweet my support or in fact share any opinions at all because I was too scared of the comeback. Now don’t get me wrong I’ve read a couple of posts/tweet threads that rationally and reasonably explain why as a follower and newer blogger they felt let down by Sarah’s comments and again I appreciate these opinions and feelings and respect the way they’ve been expressed, but sadly that wasn’t the way everyone went about it.

On the rare occasion, I have expressed a strong opinion like last week when I tweeted that I’m not a fan of bloggers who are baring more and more cleavage on Instagram, I unwittingly found myself a) possibly offending a friend of mine and b) caught in an awkward @ reply exchange about surprise surprise Sarah Ashcroft again. Thanks to Twitters new reply system this is happening way too often where you get caught in the middle of a 100-long tweet conversation because your tagged in every reply. I have to say on this occasion I did tweet and said please don’t tag me in personal tweets against her as I felt she’d had a crap enough week and I didn’t want to be associated with these kinds of sentiments. But later, after sharing my honest thoughts about boobs on instagram I felt a wave of panic all evening. Panicking that I was going to get backlash, panicking that I’d have to face a twitter storm in the morning. The fact is I stand by this opinion, but it wasn’t a personal attack. Yes, it means I unfollow accounts on insta if that’s their vibe as it’s not really my cup of tea, or if they are a friend I just don’t like those photos, but would I start trying to convince them not to do it? No, because it’s their space on the internet to do with what they wish and after all its only MY opinion.

No doubt the Twittersphere will be awash with people’s opinions about the election today, but again I don’t think I’m going to be expressing mine. A friend who was brave enough to insta story and tweet yesterday that she was voting conservative got a barrage of tweet replies/ insta DM’s trying to explain to her why her choice was wrong. Ok so she’s not voting the same way as me, but it’s not my job to convince her or change her opinion. She has her own. It’s an educated one that she’s made after a great deal of consideration and for me that’s what matters. Take the time to make an opinion and stand by it, don’t be swayed. A confession? Last election I voted for who my husband advised me to.  I know awful!!! But I believed it just mattered that I voted. This time round I’ve done my own research and made up my own mind about who I’m voting for and it looks like we’ll be voting differently from each other. Ok that’s hard, but it’s his opinion and in the same way he’s entitled to his vote, he’s entitled to his opinion too. But this post isn’t to weigh into a whole political debate, there’s enough of that around.

So, I’ve been afraid. Afraid to say what I really think online. Afraid I might lose followers or readers and I worry that it’s made me hold back a lot of my personality. Ok so I don’t want to share EVERYTHING about myself but I do respect bloggers like Hayley and Hannah who just tell it like it is. I hope I’ll become braver to speak out, especially about things that are important to me, but I still think I’ll shy away from wading into Twitter drama. Life is too short to spend your life arguing online but here’s hoping you will like seeing a slightly more opinionated side of me.

I’d love to know your thoughts on this subject? Are you open and honest online or do you shy away from being opinionated like me?

I’d also love to know if you like these more rambley style written posts too?

Let me know ALL your opinions in the comments box below or tweet me over on Twitter. 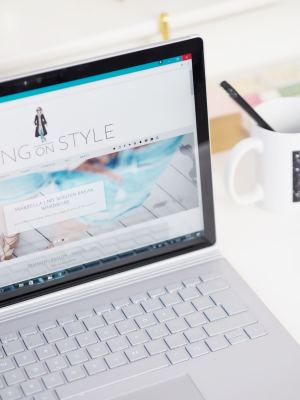 Do outfit posts need to say more than “What I Wore”?