Since I was a little girl I wanted a dog. I worked at kennels, tried to start my own dog walking business and did everything I could to spend time around dogs. I’ve always been a dog person and frequently got cooey eyed over other peoples dogs.
I always said as soon as I got my own house that was big enough I would rehome a dog. I knew I wanted an older dog, two years old or older as I dont have the time to dedicate to training a puppy and I knew I wanted a jack russell.
Thankfully my partner wanted a dog too and after much searching and many disappointments we found Eddie.
He was an older dog with some skin problems and was currently with a family whose 2 other jack russells were picking on him. We met him and fell instantly in love. One week later we were driving him home and I was over the moon.
He had a seriously bad ear infection, a bad skin problem and was quite red in places and had bald patches. After several vet visits, countless tests, antibiotics and not to mention a whole heap of money (he’s worth it) Eddie is a million times better. His coat is glossy, he eats better, has more energy and is such a happy little fella
We dont know his exact age they say he is probably about 10 but he could be as old as 12 but he has the size and temperament of a puppy sometimes. He is so gentle as is amazing with my friends children and by previous accounts has never barked, and we have never heard him bark ever.
He is on a special diet and is always trying to get other food. Several times we’ve come home to find the cupboards open and the bin contents spread across the floor! We now have child locks on the cupboards lol! But we love him so much and we’re so glad we found him and can give him a happy life.
So thats my little Eddie, the little doggy who manages to sneak himself in the back of alot of my outfit photos!! 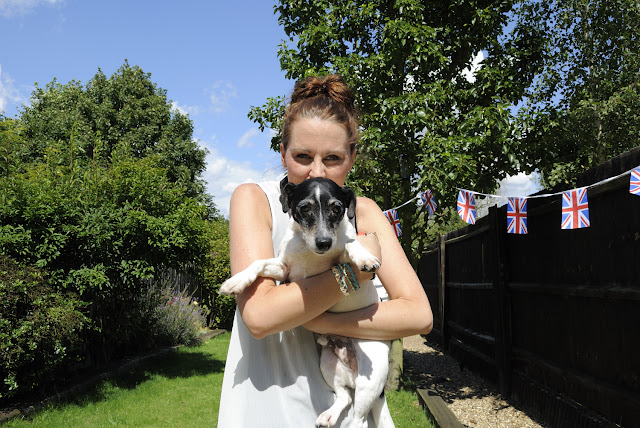